Arthur Cumberbatch was born in 1891 and baptised 23rd August 1891 at St Marys Church, Astbury, Cheshire, England. He was the eldest son of Charles Cumberbatch and his wife Sarah Hannah nee Deeming and brother of Charles Cumberbatch.
Arthur, a farm labourer at the time, married Hannah Maria Minshull on 9th January 1913 at St Mary's Church, Astbury, Cheshire. Shorty after their marriage their son Arthur was born. They would also later have a daughter, Amy, in 1917.
Arthur became Police Constable 104 in the Cheshire Constabulary on 8th February 1913. His weekly pay as a police constable was from joining on 8th February 1913 26s/10d; a year later on 8th February 1914 it was increased to 28s/- per week; from 8th February 1915 29s/2d, from 1st July 1915 31s/6d; from 8th February 1916 31s/6d and from 8th February 1918 32s/8d.  He was never promoted and has a clean misconduct record. He left the Cheshire police force after 5 years, 2 months, 12 days (1897 days) on 20th April 1918.
He  enlisted into the Army at Knutsford, Cheshire on 20th April 1918 for service during World War One as private 26500 in the Coldstream Guards. His initial posting was to the HQ Reserve Division, Chester. Other Postings and Dates: 1st April 1913 Knutsford. 13th September 1917 Sale. He was passed fit for duty at his Army medical examination on 16th April 1918 at Chester Castle. He was described as being:

Arthur travelled down to London and I suspect that he contracted the Spanish Flu and this killed him. Private 26500, Arthur CUMBERBATCH, Coldstream Guards died on Tuesday 9th July 1918 at the Caterham Military Hospital due to (1) Pneumonia and (2) Heart Failure; he was aged 26 years. Arthur was buried in the north-west of St. Mary's Church, Astbury, Cheshire on 13th July 1918. Arthur had been in the army for a total of 2 months 18 days. He is commemorated on the WW1 War Memorial in the grounds of Astbury Church. He has a Commonwealth War Grave stone in the churchyard of Astbury. He is also remembered by the Cheshire Police each November on Remembrance Day: 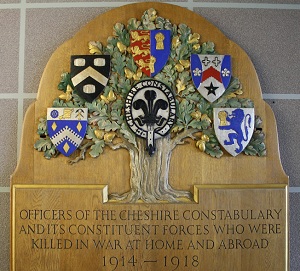 Arthur has never been forgotten by the Cheshire Constabulary, each year in November during the Force Remembrance Parade held at Winsford Police HQ his and all other officers  names are read out. There is also in the Foyer of  HQ a very large wooden Memorial Plaque that contains the names of all officers

For a list of all Cheshire Constabulary officers see: http://www.cheshire.police.uk/news–appeals/latest-news/2014/08/cheshire-constabularys-first.aspx

As a result of his death his son Arthur Cumberbatch entered St Georges House, The Northern Police Orphanage, Harrogate, Yorkshire in 1922.