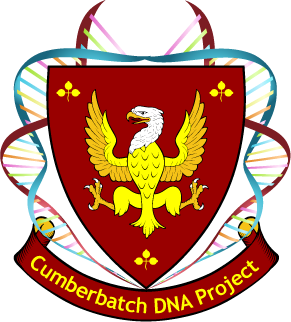 The Background to the Cumberbatch DNA Project

The DNA Project will help to discover where people with this surname came from and how they are related. DNA can help to plug the gaps caused by a lack of paper records and can offer new avenues for research and further discovery. For instance, are all of the spelling variations derived from a single common ancestor? The paper records have not been able to reveal this. However, without the traditional paper based research the DNA results would be impossible to understand.

This will be a complex DNA Project for a three primary reasons: 1) For the Cumberbatchs with English origins some individuals changed their surname from Comberbach or Cumberbatch to another. 2) Abraham Cumberbatch, the first Cumberbatch to arrive in Barbados, died with only daughters. His grandson changed his surname from Carleton to Cumberbatch in order to inherit. So the Y-DNA link to Bristol and Cheshire does not exist. 3) Finally, freed Barbados slaves took the surname from 1834 so whilst there are many called Cumberbatch I cannot tell how many may be genetically related.

Discover your Cumberbatch ancestry, your roots and your genetic cousins.

Surname Spelling Differences: Are we all related?

Surnames often change in spelling when they move from area to area and from country to country. Paper records have not revealed if the major spellings of the original surname Comberbach are genetically related or not. The major groups of surnames are Comberbach mainly in England, Cumberbatchin Barbados, England, USA, Trinidad, Guyana, Latin America and others, Cumberpatch mainly Northampton, England, Cumberbirch, Cumberbeech, Cumberlege, Cumberledge and Cumberlidge. DNA test results will show if there is a genetic relationship between these surnames.

It will be very important to test at least 37 markers before a reliable relationship can be established.

In Barbados marriages are relatively rare, so few children will be baptised with their natural father’s surname. It is often impossible to discover who the natural father was using paper records. Y-DNA will suggest which branch of the family the father will have come from. In this case, descendants may not be called Cumberbatch.
Equally, having the surname Cumberbatch does not imply that we are all related and share a single common ancestor. Some will, but most will not.

It will be very important to test at least 37 markers before a reliable relationship can be established.

Whose genes are they anyway? Surnames Change!

Marriages in Barbados are rare but that does not imply fathers were absent. Many children took their natural father’s surname in adult life unofficially. Often, paper records may survive for only two life events – a birth/baptism and a death/burial. The scenarios are:

After all Cumberbatch of Barbados was a surname adopted by the Grandson of Abraham Carleton in 1743. Charles Cumberbatch, son of Lawrence Trent Cumberbatch and Annie Cave, with ancestors from Barbados became Charles CAVE. Roger Comberbach, 1758-1814 of Cheshire, became Roger SWETENHAM; this branch stretches back to Roger Comberbach of Nantwich whose will was proved in 1602/3.

Many people were known by nick-names which may or may not relate to the individual’s actual forename. I had a great Aunt “Rene” who I tracked down to be Czarina, I would have had no chance of finding my father with his nick-name of “Smally”.

When the paper trail ends

What is in it for you?

Then click on "Join Request" in the menu bar.

More Information on DNA Testing and what is possible

A unique genetic study, undertaken for the BBC documentary Motherland: A Genetic Journey (BBC TWO, 14 February at 9.00pm), has finally provided the evidence to answer questions that historians and genealogists have been wrestling with for centuries.

For the first time since the enslavement of their African ancestors and the eradication of their ethnic identities, advances in DNA analysis have now made it possible for individuals to discover from which African region or population group their families originated.

In an historic first, a Bristol woman who took part in the study was even able to track down African relatives living on a tiny island off the coast of Cameroon.

The vast majority of the UK's African-Caribbean community are descended from the millions of Africans taken from their families and homes to work as slaves on the Caribbean sugar plantations.

The study, the most comprehensive attempt so far to investigate the specific roots of the descendants of slaves, took anonymous DNA samples via a buccal swab from 229 volunteers (109 men and 120 women). The only criterion for all volunteers was that they had four African-Caribbean grandparents.

As well as individual ancestral profiles, the Motherland study also quantifies, for the first time, one of the most sensitive genetic legacies of the transatlantic slave trade: the extent to which African slaves were made pregnant by European slave-owners.

Today, the study reveals more than one in four British African-Caribbeans have white male ancestry on their direct fatherline.

Dr Mark Jobling, from the University of Leicester, who analysed the Y chromosome, said of his findings: "[Slavery] was a power relationship between two populations and in that power relationship it was European men who where having sex with African women."

The autosomal study, investigating DNA inherited from all an individual's ancestors, demonstrated that on average more than one in seven (13%) ancestors of today's Black Britons of Caribbean descent would be of European origin.

As part of his analysis Dr Mark Shriver, of Penn State University, also examined the link between ancestry and pigmentation. He concludes that although African ancestry can be a rough guide to how light or dark a person is, appearances can be deceptive.

After in-depth research into his own origins, he discovered that although he looks like a white North American, he is, in fact, 25% African.

It follows the emotional journeys of three members of the group of genetic volunteers as they investigate their ancestry.

Mark, a music industry PR from South London travels to Niger, the second poorest country in the world, to meet the Kanuri people and reclaim a Kanuri name.

Beaula, a youth worker from Bristol, discovers that her ancestry lies in the tiny island of Bioko, Equatorial Guinea. Here she experiences an historic meeting with her blood relatives.

In contrast, Jacqueline, a Peterborough schoolteacher, explores her roots in Jamaica and discovers that a significant proportion of her ancestry is European.

"The Motherland project had two ambitious objectives", comments Baron, "firstly and monumentally, to see what genetics could finally reveal about the ancestry of British African Caribbeans. Secondly, to see whether genetics could reconnect individuals to contemporary population groups.

"The results of the three year project were more than we could have hoped for. Armed by science, people have for the first time reconnected themselves to their lost ancestry in ways that, 25 years ago, Alex Haley, author of Roots, could scarcely have imagined would ever be possible."