Ernest was born 18th August 1890 in East Hanningfield, Chelmsford, Essex. He was the son of Septimus Henry Flack a bricklayer and Eliza Caroline Flack nee Brenton. He was 1 month short of being 18 years old when he enlisted in the Essex Regiment on 21st July 1908. We find Ernest in the 1901 census at 12 Ernest Road, St. Saviours Parish, West Ham, London, England. The confined and squalid conditions of this area at the turn of the century would have been awful beyond comprehension. Ernest’s mother would die in 1910 aged 43 years old of Chronic Bronchitis and Cardiac Failure. Ernest wanted something different from his life.

The Essex Regiment was previously known as the 44th (East Essex) Regiment of the Foot and has a long and distinguished history in battle including participating in the American War of Independence. Their military history also includes battles in India, China and South Africa. The 44th Regiment’s nickname was the “Two Fours” and the “Little Fighting Fours” after their Regiment’s number.
Sadly, Ernest’s service record, like 60% of WW1 soldier’s military service records, were destroyed during German bombing during WW2 so I must speculate a little about his service career.
We know that when he marries Margaret Fox on 28th September 1910 in Dublin, Ireland he is based at the Curragh Camp in County Kildare. When he was married he may not yet have learnt of the death of his mother. His children include:

The Landing at The Dardenelles 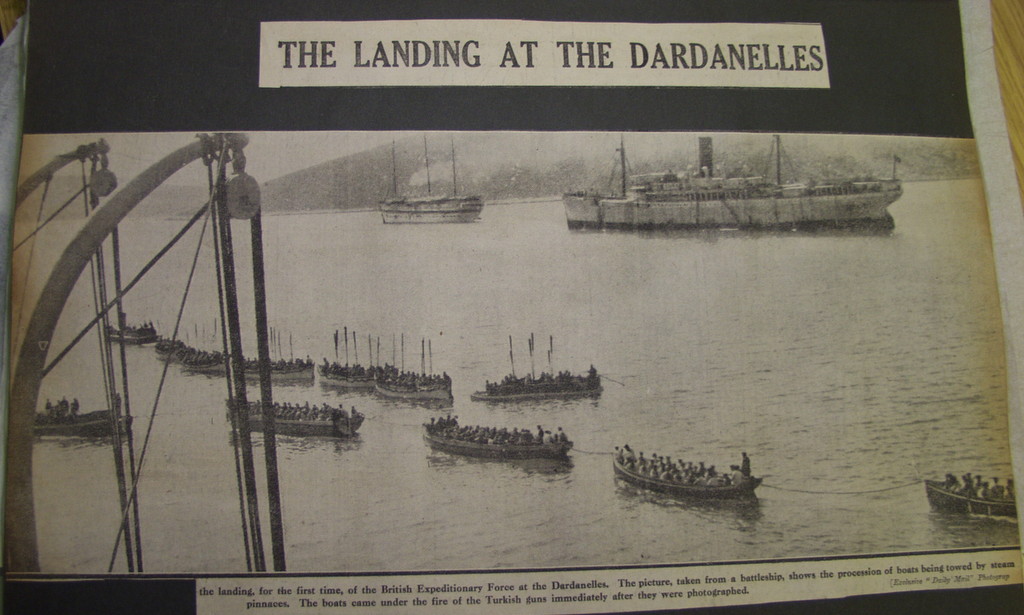 The landing, for the first time, of the British Expeditionary Force at the Dardanelles. The picture, taken from a battleship, shows the procession of boats towed by steam pinnaces. The boats came under the fire of the Turkish guns immediately after they were photographed. [Source: Essex Regiment Museum] 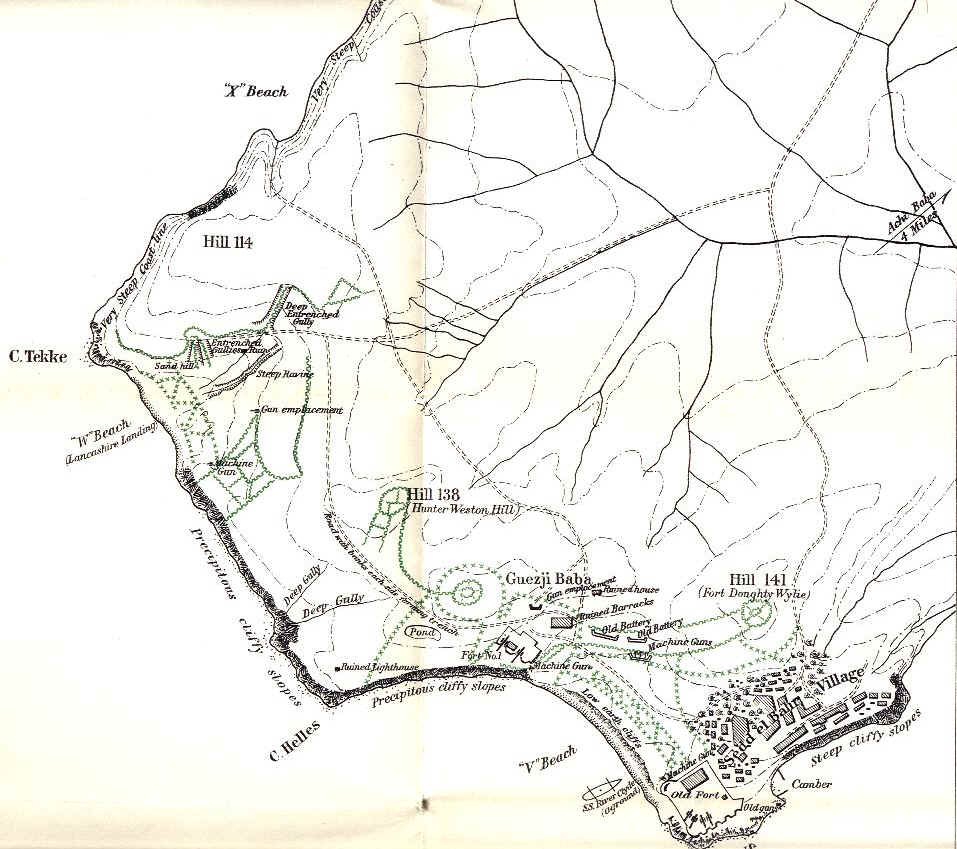 His fighting career begins on 25th April 1915 when the 1st Battalion Essex regiment is part of the landing force at W Beach, Helles, Turkey in the Balkans. This campaign is more famously known as the Dardanelles Campaign or Gallipoli. 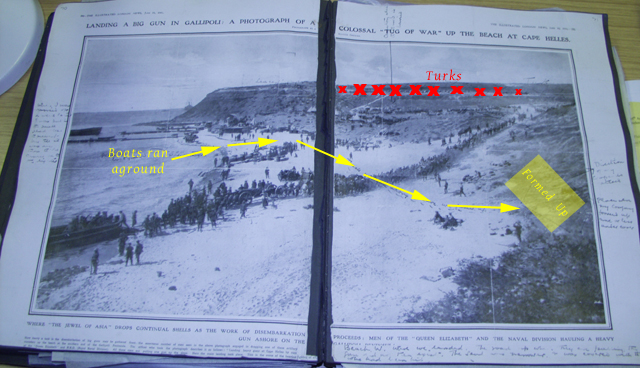 Landing W Beach Gallipoli April 25th 1915 “C” Company 1st Battalion The Essex Regiment [Source: Essex Regiment Museum]  W Beach was one of the three allocated to 29th Division on 25th April 1915, and is arguably the most famous of them all. It was here the 1st Lancashire Fusiliers came ashore, and won ‘six Victoria Crosses before breakfast’. The 29th Division landing force consisted of 12 Battalions who were namely: Border Regiment, 1st Battalion Essex Regiment, Hampshire Regiment, King’s Own Scottish Borderers, 1st Battalion Lancashire Fusiliers, Royal Dublin Fusiliers, Royal Fusiliers – City of London Regiment, Royal Inniskilling Fusiliers, Royal Munster Fusiliers, 1/5th Royal Scots – Lothian Regiment, South Wales Borderers and the Worcestershire Regiment. The landings were to be made by day because of the restricted size of the beaches, the strong current, and fear of hidden reefs. The small size of the beaches was also the reason why there had to be so many landing places at Helles: S, V, W, X and Y Beaches. W Beach differed from the other beaches used that day, in that it was almost a cove, with an ark of high ground and a long, open beach. German advisors attached to the Turks had helped in the defence of this position, and redoubts had been placed on the heights with inter-locking fields of fire, wire in the shallow water and mines. They considered it almost impregnable from any sort of landing by small boats.
The 1st Battalion Lancashire Fusiliers came ashore in companies. One came from HMS Implacable, the rest being brought in by naval personnel from HMS Euryalus. One platoon of the Anson Battalion was attached to them, and 1st Essex Regiment was to follow. About 50 yards from the beach, the boats were unhitched from the tows and they were rowed in. As the boats got nearer to the shore a tremendous fire was laid down by the Turks, causing heavy casualties. Men jumped out into the water, some drowning under the weight of their gear, others getting caught on the wire.  Despite this some men beat their way through the wire and assaulted the trenches in the area of the beach itself. Meanwhile a second force had landed a little to the north and found part of the beach here sheltered from the devastating fire. Captain Thomas Frankland then took his men forward to the Turkish positions here, and this flank was eliminated. Of the 950 who attacked, 533 were killed, wounded or missing, a casualty rate higher even than the first wave at Anzac had borne. In this brave effort the regiment had won 6 VCs (the regiment was thereafter famous for its “6 VCs before breakfast”), 2 DSOs, 2 MCs and one DCM25. W Beach must have been terrifying, but by mid-morning the 400-odd survivors could look back on what they had accomplished through their sacrifice.  Friendly fire from HMS Euryalus had knocked out one part of Lancashire Fusiliers which had got ashore, but another group had fought their way through the defences and met up with the 2nd Royal Fusiliers on Hill 114. The beach was now carried, and a line established inland. Late in the afternoon the Anson platoon and 1st Essex, and Ernest Septimus Flack, landed to reinforce the dilapidated ranks of 1st Lancashire Fusiliers. Because of the gallantry of the battalion here on 25th April, W Beach was renamed ‘Lancashire Landing’ in their honour, and was thereafter referred to by this name. Much later a ballot took place for gallantry awards, and six men were awarded the Victoria Cross:

Following the initial landings, Lancashire Landing was turned into a small port with piers going out to receive boats traveling to and from the fleet. Troops for the Helles front were brought in here, as were supplies and equipment. Wounded were taken out from the beach, and there were several Advanced Dressing Stations nearby. The banks of the cliffs were terraced, and there were command centres and dugouts here. It was used until the evacuation on 9th January 1916.

Cape Helles stands at the south-westernmost tip of the Gallipoli peninsula. To the north is W Beach, with Tekke Burnu beyond; to the east is V Beach, embraced by Fort No.1 and the Old Fort of Sedd el Bahr. Immediately inland from Cape Helles itself stand the twin peaks of Hill 138 and Guezji Baba, with Hill 114 above W Beach and Hill 141 above V Beach. It was this area and these features that formed the focal point of the 29th Division’s landings at Helles on 25th April.

The 29th Division, containing the last battalion’s of Britain’s pre-war regular army, was ordered to land at Helles and capture the peak of Achi Baba (800 feet), which stood six miles inland, as an initial step towards the campaign’s main objective of the Kilid Bahr Plateau. A Covering Force of the 86th Brigade was to land on three beaches around Cape Helles and Tekke Burnu lettered V, W and X. Two battalions of the 87th Brigade, together with the Plymouth Battalion Royal Marines Light Infantry, were to protect the operation’s flanks by landing at two additional points, S Beach, in the corner of Morto Bay, and Y Beach, along the Aegean coast opposite the village of Krithia. Although the two flank landings were initially successful, they were not exploited and, faced by a determined Turkish defence, the main landings around Cape Helles made only slow progress. It was not until the end of 26th April that a continuous line was established from X Beach to Morto Bay, but by then Y Beach had been abandoned.

After the French Division had been moved across the Dardanelles entrance as planned from its temporary landing at Kum Kale, on 28th April a concerted effort was made to advance towards Achi Baba in the First Battle of Krithia. A week later, In the Second Battle of Krithia (6-8 May), a series of attacks were made on the scattered Turkish lines which still lay some distance in front of the village. But little significant progress was made. On 4th June, in the Third Battle of Krithia, a general attack was made along the British and French line with the same frustrating results. Three more concentrated actions against the Kereves Dere (21 June), Gully Ravine (28 June) and Achi Baba Nullah (12-13 July) were more successful. Yet both Krithia and Achi Baba remained firmly in Turkish hands. On 6 August a number of minor operations were undertaken in support of the assault on Sari Bair and the new landing at Suvla Bay. They proved to be the last serious attacks undertaken at Helles.
As a position, by the middle of May once the line had been advanced away from the immediate area of the beaches, Helles held a number of advantages over Anzac. It was slightly more open, protected on three sides by the sea and had a few places, such as Gully Beach and inside Gully Ravine, which lay out of direct shell and rifle fire. Yet the characteristic conditions of Gallipoli – disease, poor food, decomposing bodies, claustrophobic, overlooked positions – still prevailed. On 9th January 1916, despite having the full force of the Turkish forces on the Peninsula set against it, the position at Cape Helles was finally evacuated.
For Ernest’s part in these overseas battles he was awarded the 1914-1915 Star and the British War Medal.

ROLL of INDIVIDUALS entitled to the Victory Medal and British War Medal granted under Army Order 5 and 301 of 1919.

ROLL of INDIVIDUALS entitled to the “WAR BADGE”