On completing his studies he joined the the 2nd Battalion, Yorkshire Regiment on 18 Feb 1902 and became a commissioned officer as a second Lieutenant on 27 January 1904. Hugh was 5 feet 11 inches in height. He served in India between 8 September 1904 and 15 February 1906, in South Africa between 16 February 1906 and 1 March 1909 and then returned to England. Hugh served as Assistant Adjutant from 2 Mar 1909 to 1911. He passed his Intelligence qualification at Aldershot 1912 and Commanded a Company of men between 1904-1906 South Africa. Hugh spoke French, Urdu & German.
Hugh married Helen Mary Oliphant on the 8th Jun 1912 in Brompton Oratory Church, Kensington, London. Their wedding was described in the London Standard:

Captain Hugh Cumberbatch, Alexandra Princess of Wales’s Own (Yorkshire Regiment), only son of Mr. and Mrs. E.C. Cumberbatch, of Croxted House, Farnborough, was married on Saturday [8 June 1912], at Brompton Oratory to Miss Helen Mary Oliphant, only daughter of General Sir Laurence and the Hon. Lady Oliphant, of 14, Hans-road. The service was taken by the Rev. Father Creuse and the Rev. Father Kypers. General Sir Laurence Oliphant gave away his daughter, who wore a dress of silver brocade veiled with old lace, her veil of old lace falling over a wreath of orange blossoms, and she carried a bouquet of white roses and lilies of the valley.

They had one son Roland Laurence E Cumberbatch born 26 September 1913.

Hugh was appointed an Aides-de-Camp on 17th December 1914. An aide-de-camp, French for assistant in the field, is a personal assistant or secretary to a person of high rank, usually a senior military or government officer, a member of a Royal Family, or a head of state. If this position was engaged in a field of battle then he would have been entitled to the 1914 Star, also known as the Mons Star. One of his three medal index cards claims that he disembarked 5th Oct 1914 and goes on to say that the "Officer in Charge of No.1 Infantry Records Office York, forwards Nominal Roll of Officers ^of the 2nd Battalion Yorkshire Regiment^ eligible for 1914 Star". His medal index card also states that his disembarkation date was 17 January 1915 and that he was therefore not entitled to the 1914 Star even though the Yorkshire records officer stated that he was entitled to it. After being awarded to Hugh, this medal was removed from him and destroyed on 9th June 1920.
On 21 October 1915 Hugh was appointed General Staff Officer 3rd Grade, Captain Alexandra, Princess of Wales's Own (Yorkshire Regiment).

Hugh was mentioned in the despatch of Lord French of 30th November 1915 and was recommended "for gallant and distinguished service in the field" and this was published in the London Gazette of 1st January 1916.

War Office,
1st January, 1916.
The following despatch has been received by the Secretary of State for War from the Field Marshal Commander-in-Chief the British Army in France: – 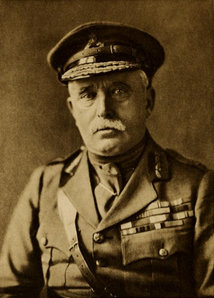 In accordance with the last paragraph of my Despatch of the 15th October, 1915, I have the honour to bring to notice the names of those whom I recommend for gallant and distinguished service in the field.

I have the honour to be,

The British Army in France.

Hugh was awarded the Military Cross on 14th January 1916.

Hugh was again mentioned in Despatches on 22nd January 1919. This time in the despatch of Sir Allenby Commander-in-chief, Egyptian Expeditionary Force:

[page] 1148 SUPPLEMENT TO THE LONDON GAZETTE, 22 JANUARY, 1919
WEDNESDAY, 22 JANUARY, 1919.
War Office,
22nd January, 1919.
The following despatch has been received by the Secretary of State for War from General Sir E. H. H. Allenby, G.C.B., G.C.M.G.,
Commander-in-chief, Egyptian Expeditionary Force:—
General Headquarters,
23rd October, 1918.
My Lord,
I have the honour to forward herewith a, list of Officers, Nurses, other ranks and Civilians whom I consider worthy of Mention for their services during the period from 16th March, 1918, to 18th September, 1918.
I have the honour to be, My Lord,
Your Lordship's most obedient Servant,
E. H. H. ALLENBY,
General.
Commanding-in-Chief,
Egyptian Expeditionary Force.

Hugh was awarded an Officer of the British Empire (OBE) for his service in Egypt in the King's birthday honours for 1919 :

CENTRAL CHANCERY OF THE ORDERS OF KNIGHTHOOD.
St. James's Palace, S.W:,
3rd June, 1919.
The KING has been graciously pleased, on the: occasion, of His Majesty's Birthday, to give orders for the following promotions in, and appointments to, the Most Excellent Order of the British Empire for valuable-services rendered in connection with Military Operation in Egypt: —
To be Officers of the Military Division of the said Most Excellent Order:-

Hugh was appointed to the War Office 3rd Grade on 1st April 1920. On 15th May 1923 Hugh was promoted to Major. He was appointed General Staff Officer 2nd Grade on Christmas Eve 1924.
Between 12 March 1928 and 10 July 1930 Hugh returned to being a Commander of a Company of Gentlemen Cadets (G.S.O., 2nd Grade) at The Royal Military College, Camberley, Surrey, England. He was placed on half pay from 10 December 1930 due to ill-health and he retired for the same reason on 7 March 1934.
On 23 Jan 1933 Hugh and Helen travelled travelled to Kingston, Jamaica for a holiday. They arrived back on 28 Feb 1933. Hugh of 53 Eccleston-square, Westminster, London died 4 May 1936 at the Belgravia-Chelsea Nursing Home, 39 Royal Avenue, Chelsea and probate was granted in London on 2 July 1936 to Helen Mary Cumberbatch, his widow. Hugh's effects totalled £13,473 3s 7d.
Hugh's Commission was donated to the Green Howards Museum:

1904 COMMISSION PRESENTED TO THE MUSEUM
29th July 2008
Hugh Cumberbatch's Framed Commission, with Watercolours and a Fragment of a Regimental Colour.
A framed Commission, three watercolours and fragments from a Green Howards Regimental Colour have been donated to the Green Howards Museum. The 1904 Commission belonged to 2nd Lt. Hugh Carlton Cumberbatch who later became a Major during the First World War. It is signed in the top left corner by King Edward VII. The Commission is accompanied by three postcard sized original watercolours and fragments of an unidentified Green Howards Regimental Colour. We know that Lt. Cumberbatch was in either the First or Second Battalion but we have no idea which Battalion’s Colours these fragments belonged to. They are only tiny pieces of cloth with no dates or battle honours visible but we have several of the Regiment's historians looking into it” says Dave Tetlow, the Museum’s Curator. The items were donated by Mr J Drake of Oxford who said “I have had them in my possession for many years and have wanted to return them to the Regiment for some time”. H C Cumberbatch, O.B.E., M.C., was born at Winchfield, Hants on the 19th May, 1884. In the Great War he served on the staff in France, and was present at the 2nd battle Ypres and Loos in 1915, and 3rd battle of Ypres, 1917. He also took part in the Palestine campaign for nine months up to the Armistice. Major Cumberbatch died in 1936. [This entry has since been removed from their website]

It is with great regret that we have to record the death of Major H C Cumberbatch, which took place at a nursing home in London on the 4th May, after a long illness. The only son of E C Cumberbatch Esq of Croxted House, Farnborough he was born on 19 May 1884, and was gazetted to the Regiment on 27 January 1904, from the Yorkshire Garrison Artillery, and joined the 1st Battalion at Sheffield, going out to India with a draft of 180 men in September the same year, where he joined the 2nd Battalion at Bombay.

Being good at all games, he soon found his way into the regimental polo and Association football teams, and at tennis he was particularly good. Early in 1914 found him at Sandhurst in command of a Company of Cadets, which he gave up in December on appointment to the Staff as an A.D.C present at the Second Battle of Ypres and Loos and the Third Battle of Ypres as a Staff-Captain, and Brigade-Major  in October 1916 to a unit of Cadets. For his services he was promoted Brevet-Major, and twice mentioned in despatches, awarded the Military Cross and Order of the British Empire. In 1920 he obtained the Staff College certificate. Owing to his illness, the regiment lost a very popular officer and the prospect of a successful career in the Army was denied him as he had to go on half pay in 1930 and retired four years later.

Major Cumberbatch married on the 8 June 1912 the only daughter of the late General Sir Lawrence Oliphant, and our sympathy is fully given to his widow. The funeral took place at Brookwood on the 7 May, and was attended amongst others by Major H N Bright, MBE, representing the 1st Battalion, and Lieut. P.G. Bulfin representing the Colonel of the regiment. Lieut. Col. Kinsman and Major L F Lanyon were also present.

Photo of the Officers of the 2nd Batallion Yorkshire Regiment with the kind persmission of Edward Nicholl at Remembrance – The Yorkshire Regiment, First World War: http://www.ww1-yorkshires.org.uk/html-files/photos-groups.htm