Ephraim Cumberbatch was born in January 1894 in Silverdale, Staffordshire, England and was the son of Ephraim, Senior a Coal Miner, & Eliza Alice his wife. Following his school years he initially followed his father into the Colliery before answering the call of King and Country. 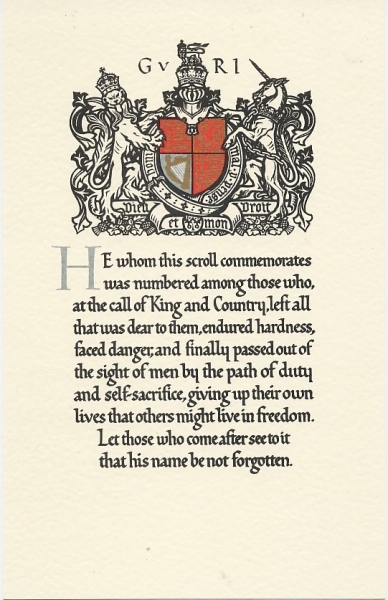 He whom this scroll commemorates was numbered among those who, at the call of King and Country left all that was dear to them, and endured hardness, faced danger, and finally passed out of the sight of men by the path of duty and self-sacrifice, giving up their own lives that others might live in freedom. Let those who come after see to it that his name be not forgotten.

Born: Silverdale, Staffordshire 1894 and was Killed in Action in France 12th October 1917

Ephraim Cumberbatch was born in January 1894 in Silverdale, Staffordshire, England and was the son of Ephraim, Senior a Coal Miner, & Eliza Alice his wife. Following his school years he initially followed his father into the Colliery before answering the call of King and Country.

On Monday 10th August 1914, and at the age of 20 years and 8 months, he left his family home in Silverdale and travelled to Stoke-on-Trent, Staffordshire, England and enlisted in the Army. With God’s help, he took the Oath of Allegiance to King George Vth.

This 130lb, 5 ft 9’ man with a 37½’ chest was in good physical shape. He had been vaccinated as a child and had a fresh complexion with brown eyes and brown hair. He had perfect vision with his right eye, but his left eye was short-sighted at 6/9. With his left eye, he could see clearly objects at 6 ft where his right eye could see them at 9 feet. However, it took the examining Captain Doctor N. Wall no time at all to declare him fighting fit and to approve and appoint Ephraim to the Royal Fusiliers. He joined for a three year term and was assigned regimental number 3.

Sadly the trail goes cold for 18 months, until he becomes an active service casualty in the field when he is admitted for shell shock on 3rd & 4th March 1916 to a General Hospital in Rouen, France. On the 22nd March 1916 he is posted back to his Base Depot and is then posted to the 5th Battalion on 2nd June 1916.

He transferred to the Machine Gun Corps on Monday 31st July 1916 and was assigned regimental number 45216. He travelled from Folkestone, England to Boulogne, France on 13th August 1916 and joined his Base Depot at Camiers in France on 14th August 1916.

On Monday 25th September 1916, Ephraim sprains his back and is admitted to a General Hospital at Rouen. Four days later he is transferred to a convalescence unit at the hospital. The Army considers his sprained back to be of a trivial nature and that it would not interfere with Ephraim’s military duty. He returned to Camiers on 9th October 1916 following his discharge to duty from the Rouen Hospital on 6th October 1916.

He contracts Bronchitis at Camiers 18th November 1916 and then contracts Tuberculous Myalgia at Camiers on 17th February 1917 and is admitted to hospital on 23rd February 1917 for one day. He returns to the convalescence depot and rejoins his Base Depot 7th April 1917. He once more is admitted to hospital on 15th April 1917 and discharged to duty 6 days later and returns to his Base on 22nd April.

He rejoins his 26 Machine Gun Company, Machine Gun Corps in the field of battle on 21st June 1917. On 12th October 1917 Private Ephraim Cumberbatch is killed in action.

For taking part in the British Expeditionary Force (BEF) in France, Ephraim Cumberbatch is awarded the 1914-1915 Star. He is also awarded the British War and Victory Medals. He was buried at the Tyne Cot Cemetery, Zonnebeke, West-Vlaanderen, Belgium, where a memorial exists on Panel 154 to 159 and 163A.

The War Office swung into action. They wrote to the Officer in Charge of the Machine Gun Corps Records Dept to ensure that Ephraim’s personal property and medals were sent to his father at the family home of 26 Vale Pleasant, Silverdale, Staffordshire, England.

On 19th October 1920 Ephraim’s father received a letter from the Machine Gun Corps. It simply read:

“Dear Sir or Madam
I beg to enclose herewith His Most Gracious Majesty’s letter together with the Memorial Scroll of 45216 Private E Cumberbatch. Kindly acknowledge receipt hereon. Prepaid slip enclose for same.”

“Buckingham Palace I join with my grateful people in sending you this memorial of a brave life given for others in the Great War.     George R.I”

The receipt was returned by Ephraim’s father with his signature and with the additional words hand written on the receipt:

“ Received with thanks, yours truly E C [Ephraim Cumberbatch]” 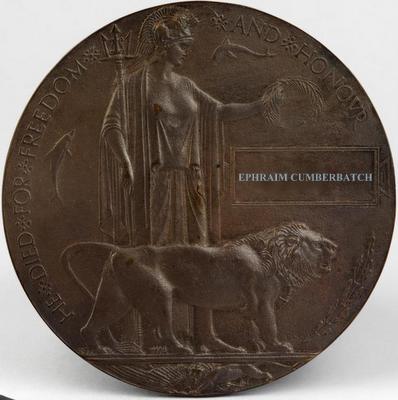 The final award, which was dispatched under separate cover in stiff card wrapping enclosed within white envelopes bearing the Royal Arms and again accompanied by a letter from King George V which bore his facsimile signature, was the “Next of Kin Memorial Plaque”. This was commonly referred to as the “Dead Man’s Penny”.

May Ephraim Cumberbatch rest in the peace that he helped to create for us all.