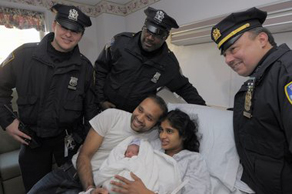 Officer Atiba Joseph-Cumberbatch helps with birth of boy on a train.

“Blue Monday” so called due it being believed to be the most depressing day of the year was a “Blue Monday” for a different reason yesterday. NY Port Authority Officer Atiba Joseph-Cumberbatch and his partner Officer Krzysztof Kutarnia were called to help with the birth of a baby on a PATH train heading from New Jersey to mid-town New York City.

The PATH train was turned into a non-stop express train to get the young couple to hospital in Manhattan. However, when the officers joined the train at 33rd Street the baby had just been born between 23rd Street and 33rd Street stations at 10:00am Monday 16 January 2012.

When Port Authority Police Officer Atiba Joseph-Cumberbatch’s son couldn’t wait to be born last March, his training came in handy. He helped his wife deliver their son in their car in the parking lot outside Hackensack University Medical Center.

I know with my son, the big thing was clearing out his airway and keeping him warm